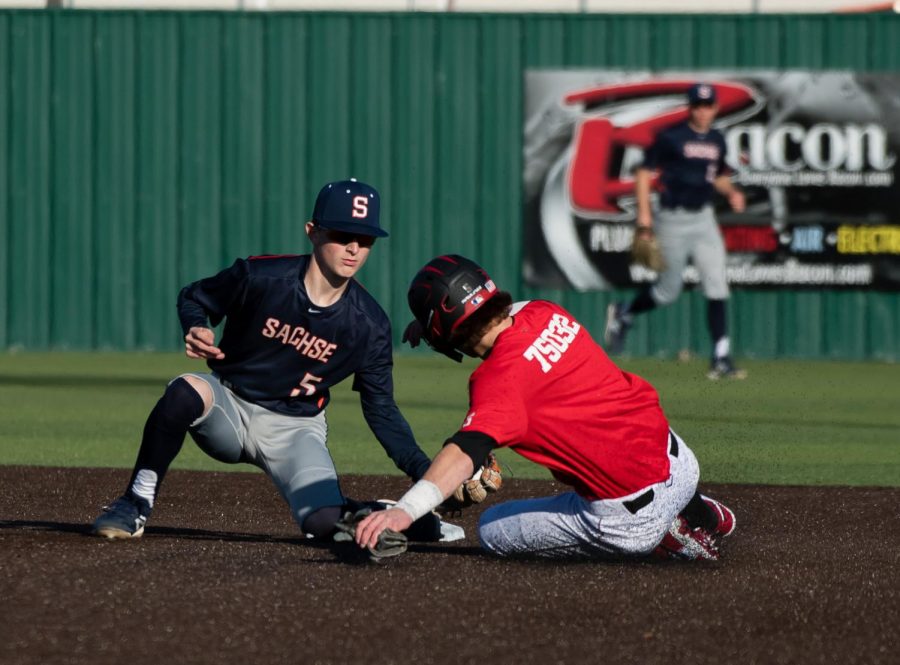 The Mustangs will not be able to defend their district title this year due to the COVID-19 outbeak. For the seniors, this is a sad ending to what could have been an exciting year.

“We wanted to turn a lot of heads this season,” senior center fielder Drake Herrera said. ”We were thought of as kinda an underdog after all the senior talent we lost last year, but we were ready to compete.”

March 12 was the last  game for the Mustangs. The game against Flower Mound Marcus ended in heartbreak after senior Thomas Kuykendall started the game on the mound for the Mustangs as the number one starting pitcher, allowing one run and one hit over six innings of work.

The focal point for the offense came from junior designated hitter Kyle Stanners who got a hold of a home run in the fourth to give the Mustangs a one run lead. But Marcus fought back late and ended the ballgame on a walk off sacrifice fly handing the Mustangs a 3-2 loss.

“This was a tough loss,” Kuykendall said, ”We had the lead all game and just couldn’t shut it down in the end. We know that we have to work on closing down games and securing that win.”

One of the better games for the Mustangs came in a 13-0 win over Frisco. Kuykendall pitched another gem going all six innings collecting 10 strikeouts and not giving up a run.

”I really saw the ball well,” Ingram said. ”I was looking for a good pitch to hit and start a rally for the team, and we got going early and didn’t slow down.”

But with the abrupt ending to the school year due to Covid-19, the Mustangs end the season with a 3-9 record in tournaments, and the seniors will have a rough ending to their high school careers.

“I felt like this was a really good chance for me to make my mark,” starting pitcher senior Cade Harris said. “I really wish we could get back out there and dominate.  We were ready to put on a show and prove our skills.”

The hard work of the 2020 class will not be fully displayed because of unthinkable circumstances.  The COVID-19 outbreak has resulted in many losses for the senior class.

“I was really looking forward to defending our title,” shortstop senior Mark Anzaldua said. ”I’ve been on varsity all four years. For this year to end like this kinda sucks, but I’ll be leaving better than I came.”

2020 will be known as the season that wasn’t with many close losses in tourney play. The Mustangs could have competed for a playoff spot, but we will never know.