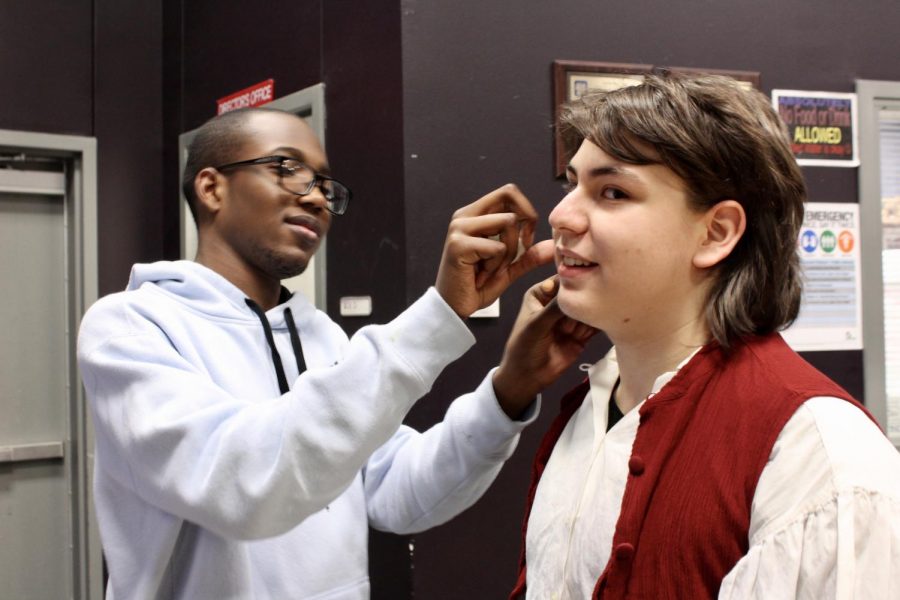 The actors say their lines.

The curtain closes and the show ends.

The actors take their bows and the audience applauds enthusiastically.  It’s another successful production.

What the audience didn’t see was all of the work behind the scenes that goes into producing a play  –the technicians backstage adjusting the levels on the actors’ mics, the hours of programming and designing lights and the months of preparation for the show including building the set and making props.

Mustang Theatre has been working on Beauty and the Beast which has proven to be one of the most tech-heavy shows they have done in a while from the elaborate set to the intricate costumes to the spectacular lighting. Being a technician is a lot harder than one might think.

“I wish people knew how important tech was because it’s the backbone to productions,” senior Jovani Villarreal said.

The technical process starts off with the technical director designing the set, and once the set is designed, it’s all hands on deck to bring that idea to life. For Beauty and the Beast, it took less than a month to build the set which included a castle, two rotating platforms to transform the castle into the village, and two wagons to represent Belle’s cottage and the tavern.

“The hardest part of building the set is making all the different units and set pieces cohesively come together,” senior Collin Day said.

Before tech is added to the show, it is the technicians’ jobs to get props, costumes, set, and anything the show will need together. They might be pulling props to use, focusing lights to hit different areas or making costumes.

“Leading up to tech week is similar to cramming for a final exam,” senior Sherri Baker said. “You’re trying to look at everything you need in a limited amount of time.”

Tech week is when everything ties together, all the different aspects of tech join the performance. The week consists of programming all the lighting and sound cues then running them with the show.

Day said that tech week is meant to mimic a show but with the ability to hold a scene if something needed to be fixed such as a lighting or a sound cue.

A good run of a show for tech is characterized by everything going smoothly and no kinks or glitches. Going unnoticed is part of the job.

“Technical work suits me well because I prefer to work behind the scenes,” Day said. “But when you get noticed for all the hard work you do, it makes you feel a lot better.”

Tech theatre is just as important to a production as it is to the student technicians. Through learning tech theatre they have developed a strong work ethic, patience, and different skills that can’t be taught in a regular classroom.

“Tech theatre has helped me find a place where I belong and has also helped me find my future,” Day said.  He said he is planning on pursuing lighting design in college.