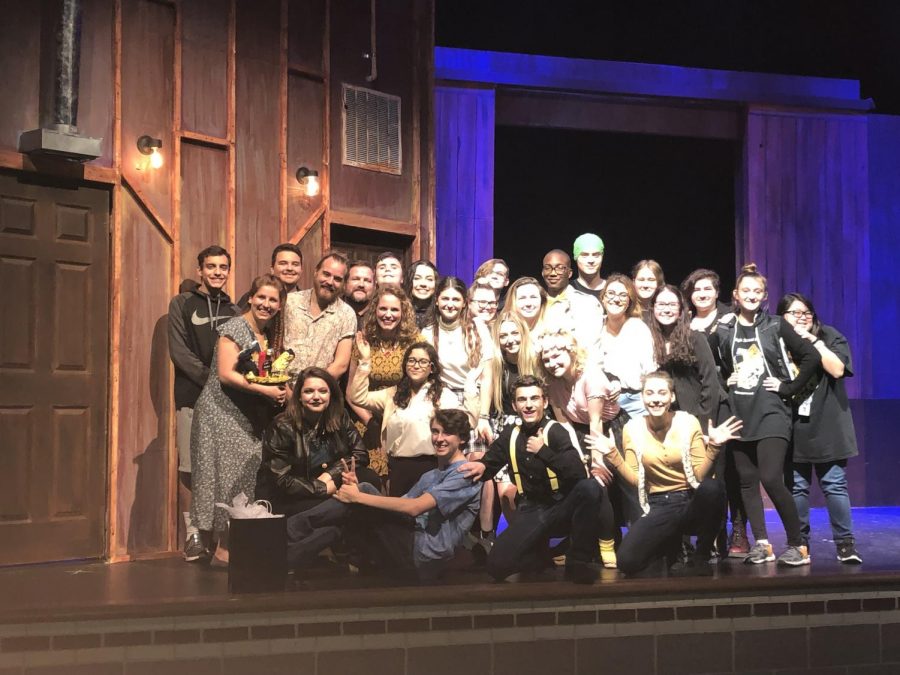 Cox and Miller with the cast and crew of Puffs.

Performing a play is a nerve-wracking experience, but a play that has never been performed in Texas with the playwright sitting in the audience is a whole other level of anxiety. That’s what Sachse Mustang Theatre members experienced with the premiere performance of Puffs, written by 2007 SHS alumnus Matt Cox.

“It put a lot more pressure on our shoulders as actors because he probably had a vision in his head of what the show would look like and we had to meet those expectations and then exceed them,” junior Conner Carroll said.  Carroll played Puffs lead character, Wayne Hopkins.

Puffs is about the Puffs who just happened to be there when a certain boy wizard went to a certain school of magic.

Junior Alicia Pfeifer played the Narrator in the performance. “It was a really funny show, but it also had a lot of heart to it. And if you don’t like Harry Potter, you’d still enjoy Puffs,” Pfeifer said.

Since Puffs is a parody off of a well-known wizard franchise, more than 700 people came to see the production. Cox saw the show on the closing night along with Puffs original Off-Broadway cast member Andrea Miller.  Before the final performance, the cast and crew got to have a Q&A session with Cox and Miller.

“Having my play performed on the stage where my theatre career began was a combination of surreal, wonderful, and dare I say, magical,” Cox said.  “I had a blast watching the show, and I can only hope the audiences did too.”

This is the first time for Sachse Mustang Theatre to perform an alumnus’ work.

“Performing a former student’s work is proof that teaching people creativity and teaching people to do what I love is important,” Puffs director and theatre teacher Libby Rotan said.  “It shows that you can do anything with creativity.”

Having Cox come to the show inspired the cast and crew about their futures in the performing arts.

“Knowing that Matt Cox made it in New York makes me think that I can make it as an actor,” Carroll said.  “If he can make it, anyone can make it as long as you keep trying. You don’t stop, and just give it all you got.”